National Day of Action against Bullying and Violence. Bullying. No Way!

This Friday, is The National Day of Action against Bullying and Violence (NDA) is an important day to mark Australians standing together to say “Bullying. No Way!”

The NDA is chance to reignite the national conversation about bullying prevention and an opportunity for schools to showcase their anti-bullying strategies. #TakeaStandTogether #NDA2019

The NDA is Australia’s key anti‑bullying event for schools and encourages all Australian students to stand united against bullying and violence in the classroom, in schools and beyond. 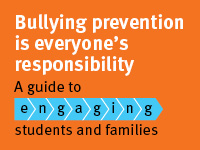 Bullying Facts:
* Approximately one in four Year 4 to Year 9 Australian students (27%) reported being bullied every few weeks or more often (considered to be frequent) in a national study in 2009. 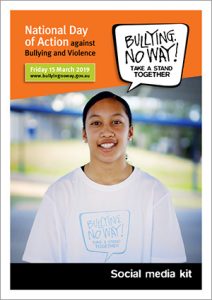 * Frequent school bullying was highest among Year 5 (32%) and Year 8 (29%) students.
* 83% of students who bully others online also bully others in person.
* 84% of students who were bullied online were also bullied in person.
* Peers are present as onlookers in 85% of bullying interactions, and play a central role in the bullying process.
* Hurtful teasing was the most prevalent of all bullying behaviours experienced by students, followed by having hurtful lies told about them.
* Online bullying appears to be related to age (or access to technology), with secondary students more likely to engage in bullying online than primary school students
* Young people over the age of 15 are less likely than students between 10 and 15 years of age to be involved in online bullying.
* Approximately one in five young people under 18 (20%) reported experiencing online bullying in any one year. The figure of 20% has been extrapolated from a number of different studies which found rates varying from 6% to 44% of students.
* School staff report an average of 2.1% reports per student of online bullying, with 1.2 per 100 for primary schools and 9.1 per 100 students for high schools.
* The majority (72%) of schools reported managing at least one incident of online bullying in the previous year.

Bullying prevention is everyone’s responsibility explores the various stages of developing a school bullying prevention plan or policy. It also includes a template for preparing for student and family engagement at each stage. 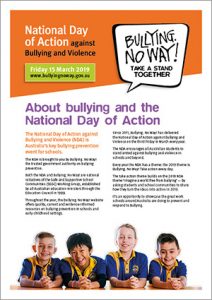 The National Day of Action against Bullying and Violence (NDA) is held annually on the third
Friday of March. It is an opportunity for the whole school community to ‘take a stand together’ against bullying and violence.
The day is an initiative of all Australian education authorities and is managed by the Safe and Supportive School Communities Working Group.
The first National Day of Action against Bullying and Violence was held on 18 March 2011 and continues to grow every year. Visit the photo gallery to see the vibrant and creative activities in schools across Australia. The National Day of Action Facebook page also has stories, images and videos from activities held throughout the country on the day.

Why staying safe online, really should matter to you.
April 18, 2019